Inspired by his dad, who owned a live event company, Justin Rothman gained a lot of experience working in the family business. Still wanting to do something on his own, after graduating HS, Justin’s mom, who worked at Kendall College of Art and Design, encouraged him to enroll in Culinary School. He found he had a lot of talent and went on to grow a successful career as an owner/operator of over 30 restaurants. But the hours were long and Justin felt the need for a career pivot. Experienced in live events, he decided to enroll at Illinois Media School.

With a passion for video and sports broadcasting, Justin learned a wide range of skills, hands-on, and also got to host his own radio show. Each day presented something new and with instructors who were industry pros, Justin also learned the importance of networking.

Living in the city, Justin had a 3-hour commute to the Lombard campus. Additionally, he had a one-year-old son, so he had to work while attending classes. He juggled his schedule because graduation was his goal. With the support of his instructors, he found success.

Combing his excellent soft skills from the food industry, experience from the family biz, and technical skills acquired at Illinois Media School, Justin was focused on finding an industry job.

Ironically, he took a restaurant job until he landed his first opportunity with Encore (formally PSAV). He did such a great job as an Event Technologist, that he was in high demand across properties. He learned a lot on the job, leveling up to Audio Video Engineer Tech Lead, working at one of the largest hotel meeting spaces in the city, the Hyatt Regency.

Opportunity also opened up as a Producer and On-Air host, and Justin began to grow his resume. He worked as a Radio Host at WVOG Media Chicago and Station Manager and Show Producer at WCGO 1590AM.

This year, Justin is realizing his dream as he landed a job at ESPN Chicago as Board Operator/Producer. Hired to produce the Chicago White Sox games, he is now producing a wide range of shows across all shifts and loves where he has landed.

In addition, Justin is working as Audio Video Producer/Engineer for Northwestern University Pritzker School of Law and Technical Director at the City of Evanston.

His son is now a young teenager, and Justin hopes he inspires him. A kind and very entertaining guy, Justin Rothman has landed in an industry that is a perfect fit!

We are excited for Justin to reconnect with the campus to mentor current students and join our Speaker Series.

Our Beonair Network of Media Schools Alumni are doing great things and we are proud of the legacies they continue to grow. Passionate and wanting to give back to the next generation of media makers, Justin shares this advice, “Never give up. Have a goal, shoot for it and don’t let anyone or anything lead you astray.” Great advice from this industry pro! 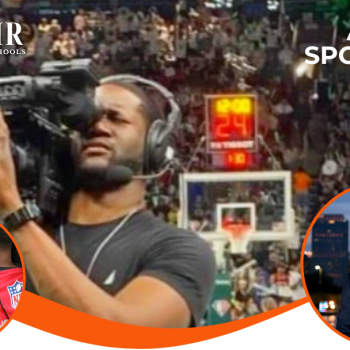