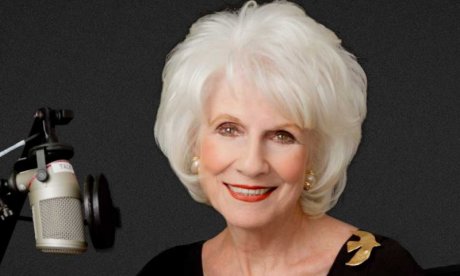 Diane Rehm is one of the most popular radio personalities on air today. Every week over 2.2 million listeners tune into her Washington D.C. based radio program The Diane Rehm Show.

Rehm’s deep personality and fast mind help make her a perfect fit when interviewing the movers and shakers of the times. Sometimes controversial, Rehm continues to be one of the most interesting public figures in broadcast journalism today.

Diane Aed was born September 21st, 1936 in Washington D.C. Her family was Greek Orthodox Arab with Turkish and Syrian roots.

Graduating from High School, she took a job as a radio dispatcher with Washington’s highway department. For all of her quick wit, motivation and intelligence, she never attended college.

She has been married twice. The second marriage was to John Rehm, the father of her two children, David and Jennifer. They spent 55 years together until he passed away in 2014.

Not Just a Radio Star

With radio work, acting and writing best-selling books, Rehm is truly a woman of many talents.

In 2006, she starred in the movie Encore with John Palmer. 2007 was the year she performed with Jimmy Carter in Jimmy Carter Man from Plains and in 2008 she was in I.O.U.S.A.

She has written her own autobiographies four times. The autobiographies all cover different parts of her life. Dealing with her cultural roots in Finding My Voice (Knopf, 1999), she discussed living as an Orthodox Arab. The book, Toward Commitment: A Dialogue about Marriage (Knopf, 2002), explores deep personal and marriage issues with her husband. She writes about living with her long-haired dog in Life With Maxie (Gibbs Smith, 2010) and her latest book is, On My Own (Knopf, 2015).

A career of more than three decades has led to a long list of awards, honors and recognitions. Some of the most notable include:

● In 2014, Diane was presented the National Humanities Medal by President Obama. The White House said of Rehm: “In probing interviews with everyone from pundits to poets to Presidents, Ms. Rehm’s keen insights and boundless curiosity have deepened our understanding of our culture and ourselves.”
● She won a Personal Peabody Award in 2010
● “Washingtonian of the Year,” and one of the “150 Most Influential People in Washington” by Washingtonian Magazine
● Excellence in Journalism Award from the American News Women’s Club in 2011
● The Association for Women in Communications bestowed the International Matrix Award.

Diane Rehm is an extraordinary woman journalist and has covered many key social and political issues in her lengthy career.