The Illinois Media School was opened in 1986 to respond to the needs of area radio and television stations for entry-level positions in their industry. The Chicago campus opened in 2010.

Illinois Media School, Chicago Campus is a great place to go to school in a city rich with culture, history, and entertainment.

Our 8-month hands-on, real-world technical training gives our students the tools they need to be competitive in today’s industry. Our core program gives you the opportunity to experience the industry as it is today. Taught by working professionals and guided by experienced career services advisors, students are fully trained and prepared to enter the broadcasting industry with minimal on-the-job training.

The Advanced Film and Video Production Program provides contemporary and traditional skills in the modern production of digital video content. The program helps the intermediate, or experienced multimedia professional learn more about modern styles and technical skills. The program prepares students for their field with history, pre-productions, shooting, and editing skills. This program offers advanced education with the ever-changing contemporary techniques of lighting, shooting, and editing.

The Audio Production program provides an entry into the field of studio-based audio recording and production. The course hones students’ skills in audio editing and engineering and applies that skills to the in-studio recording environment. Students learn the theory of acoustics, electronics, and audio components, and they learn to record, track, mix, and master music in an audio facility. Importantly, students learn and practice industry-standard audio engineering software. The course also provides instruction on the music and broadcasting industries and the range of professional opportunities as an audio engineer and music business professional.

Click on a field of study to find out what programs are available at Illinois Media School.

The Illinois Media School, Downtown Chicago Campus is located in the center of downtown Chicago. The School has a fully-equipped TV Studio and master Control Room with a high definition Tri-Caster Production Switcher and live virtual backgrounds and sets in addition to 23 video editing stations. The School also has 10 fully-equipped Radio Studios and 2 On-Air Internet Radio Stations.

Accessible to all major highways located in the heart of the Loop in the center of Chicago. The Loop is home to a wide variety of historic sites such as Dearborn Station where all travelers arrived until Union Station was built. Attractions like the fabulous Skydeck at Willis Tower offers you a panoramic view of the city from 1,353 feet into the air. We also have an unmatched public transportation system that features the iconic “L” trains, the Metra and bus service. 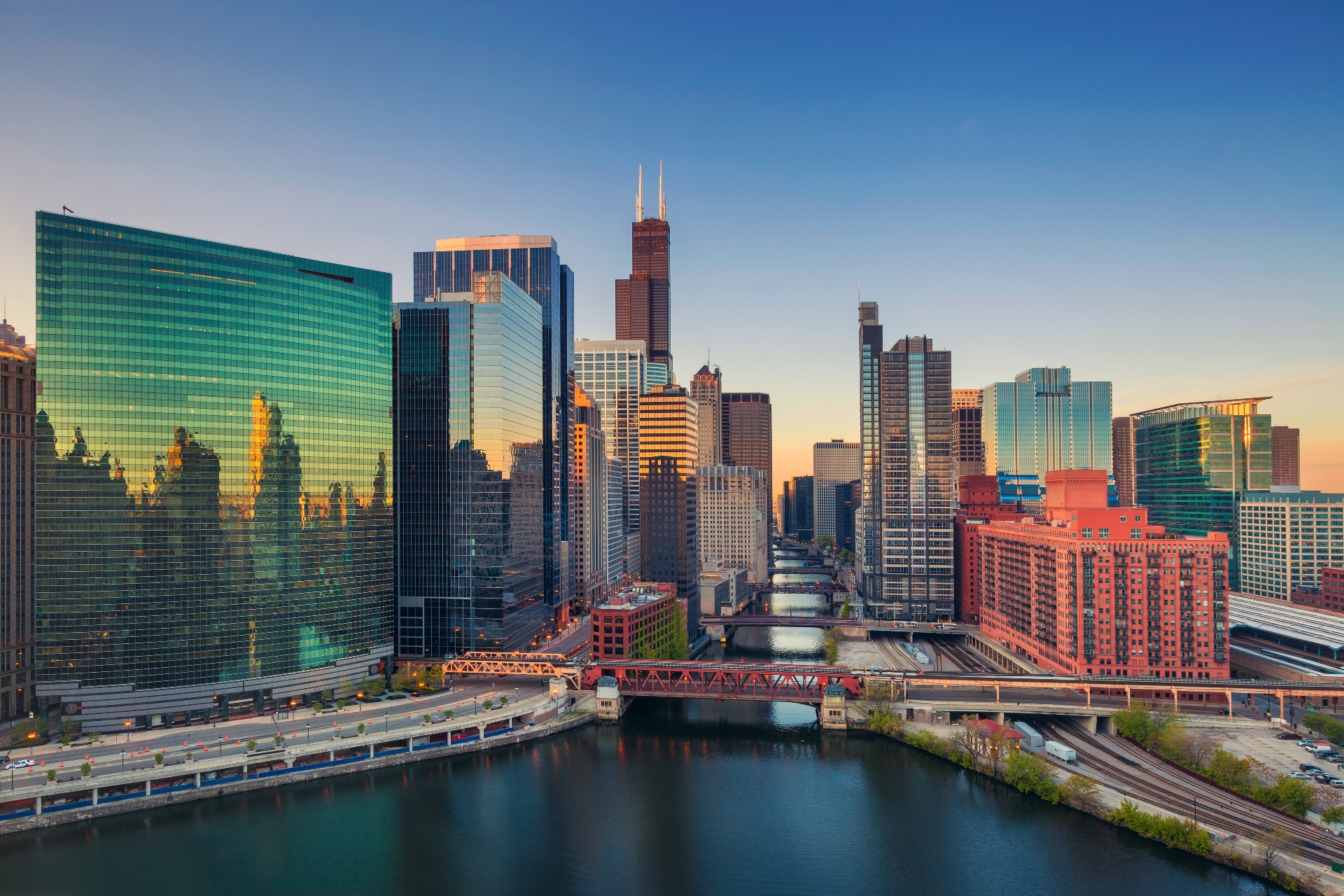 Our Chicago college campus is centered in the hustle and bustle of downtown, putting you right in the middle of all the big-city action. The city serves as the perfect backdrop for your learning experiences both on- and off-campus. Lively, diverse, and rich in arts and culture, there’s no city quite like Chicago.
If you feel drawn to our college in Chicago, we can promise you that both the school and the city have so much to offer. Whether you hail from a hometown that’s small and rural or a busy metropolis, relocating to Chicago will be the beginning of an incredible adventure.

Where to Live in Chicago

Looking for places to live in Chicago? Home to a mix of homes, condominiums, and apartments, Chicago has plenty of options for the new resident. You can choose between buying or renting a home, and price points are diverse, making it possible to find something on varying budgets. Plus, because Chicago is one of the most walkable cities in the nation, you’ll be within minutes of good amenities no matter where you choose to live.

There are around 200 unique neighborhoods spread throughout Chicago, dividing up into several major sections:

The South Side is the most extensive section, making up more than half of the city as the Port of Chicago. On the North Side, you’ll find many residential options, including high rises along the lake. The Loop is the city’s business district and is also where you’ll be attending your classes at our campus.

Things to Do in Chicago

While you’re on-campus, you’ll be busy enjoying the challenge of hands-on multimedia education. But when class isn’t in session, you definitely won’t have to look far for great activities and exciting attractions in Chicago.

One of the best things about joining our Chicago campus is the positive sense of community you’ll find here. It’s not unusual for students to frequently get together before and after classes, whether it’s to grab a quick cup of coffee or do some sightseeing. Here are just some of the highlights of Chicago to look forward to when you arrive:

As one of the most vibrant cities in the United States, Chicago is a fitting place to begin your journey towards an exciting media industry career. Our Chicago media school has been a part of the thriving city’s downtown area for more than a decade, welcoming a diverse population of students who are ready to pursue their professional dreams.

Whether you’re coming to our college in Chicago to study broadcasting, film and video production, media and sales marketing, audio production, or sports broadcasting, we’re happy to welcome you to the Windy City. Here, there is an array of opportunities, ready for the taking – so what are you waiting for?

Divine Star
I am GRATEFUL to be here. <3

Nia Wells
Amazing school! Scrib made us feel so welcome and at home

Sabrina L
This school is great vibes through and through. Their staff, their mentors, their space, the students, and the experience overall is a blessing in my life. I’ve been a student at IMS for a month and I’m finding my voice as an individual, becoming more sociable , networking, building my brand, learning media processes & elements, and having legitimate fun along the way.

Minding Mines
There are a lot of great opportunities and an amazing support system for you to start and thrive in media. I am truly enjoying my experience here. I suggest you come here and take advantage of what this school have to offer.

BRITNEY ASKEW
CHECK THIS! FIRST day of class I learned how to record audio, start building my website, learned the difference of PSA and Commercials and went out and a camera BY MYSELF might I add, and actually had fun doing it! I'm only in my second week, but let me tell you, I get SUPER excited to come to school everyday! I joined this school right on time, because I was feeling super low about some stuff personally and from the minute I got the first phone call about the school, to the same day coming in to register....Everyone was super welcoming and motivating. They greeted me with a smile on their faces, and I've been happy ever since. I travel about an hour every morning to get to class, and I'm excited to be there everyday. I've been motivated since day one, and LITERALLY everyday I learn something new that I can take away in my personal life with my business. I'm SUPER excited to see where this course will take me! I'll check back in 8 months AFTER I graduate! COME HERE!!!!!!! You WON'T regret it!

Kimani Fleming
Awesome place. The faculty are very nice. The courses are so inspiring and hands on.
Google rating score: 4.5 of 5, based on 148 reviews
Scroll