How to Have A Radio Voice | Be On Air

Do you have a love for all things radio? Would you like to speak to millions of listeners around the country, either with a talk show, a top 40 radio program or some other type of show? If so, heading to broadcasting school is an excellent opportunity for you.

Now, some people have a great radio voice right out of the gate and just need to learn how to use it. Their pitch and tone is soothing to the ear and people will tune in just to hear the sound of their voice. Other people need to work on their voice to improve it. Whether you currently in broadcast school or you are looking to enroll, it is never too early or too late to improve your radio voice.

Before you do anything, you need to get to know your radio voice. Have you ever heard yourself recorded before? You probably sound a bit different than what you think. That is common with everyone. You need to understand your own voice, know the qualities of it and listen to yourself. This is the only way you can begin to make improvements.

Chances are, if you have recorded yourself and listened back, you might notice your voice drops off at the end of sentences. It is common to trail off when coming to the end of a thought or idea. However, you don’t want to just drop off while on the air. You need to stay constant and maintain a strong voice throughout the entire sentence. Next time you listen to professional talk show hosts, focus on how they talk, especially at the end of sentences. Chances are you’ll notice they maintain their voice fluidity throughout the train of thought.

It doesn’t matter how great your voice sounds, if you can’t enunciate you are not going to have a career in the radio business. Have you ever heard an interview with someone over the radio that doesn’t enunciate? It is nearly impossible to know what they are saying. That is why you need to practice enunciating. Slow down how you talk and make sure you say every word properly. You might want to watch yourself in the mirror and make sure you are opening your mouth all the way while talking. You might look silly at first, but it is all going to help you with performing and improving the quality of your speech.

Move On After Mistakes

Have you ever been in public and had trouble saying something? Perhaps you were in the middle of a train of thought and switched words you wanted to say. Your mouth started to say “large” while your brain wanted to say “massive” and you end up saying “larssive.” Mistakes happen!

Professionals may not say a word correctly. They might accidentally say the wrong word. No matter what happens, you need to move on and not dwell on it. This way, you can avoid any sort of attention on the issue. The less attention you place on the mistake the less your audience is going to focus on it.

You normally have limited amounts of time to cover specific topics, which means you don’t really have the time to focus in on what you said, how you said it and why you should have said something else. You made a mistake. That’s fine. Just move on and you’ll be all right.

Be On Air provides a wide range of media programs to get you up and running. Contact us today! 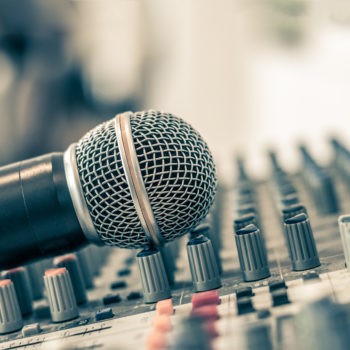