If you’re like most people, you think about the athletes when it comes to the biggest salaries in professional sports. Maybe the coaches come in second – a distant second at best. Perhaps it’s the owners who really come out on top.

However, the people you probably didn’t think of are the sports announcers. Sure, they call the games and provide valuable insights, often gleaned from years of professional sporting experience, but there’s no way they could be raking in similar big bucks right?

The fact is that some sports announcers pull in more money than some athletes. Keep reading to learn which American sports announcers earn the most money, with earnings figures provided by totalsportek.com. You can decide whether or not they really deserve it.

The host of his own wildly popular radio show, The Jim Rome Show, on CBS Sports Radio, Jim Rome is heard and loved by millions of listeners across the country. Rome climbed the ranks of sports broadcasters throughout his career with stops at Fox Sports and ESPN along the way. He earns $30 million annually.

If you watch professional sports or Olympic coverage, Bob Costas is a name that you surely already know. Even if you don’t watch sports, you’ve probably seen Costas on late-night talk shows, morning shows and a whole host of other places. While Costas is well-known for calling major league baseball games, he also dabbles in football. Perhaps combining all of those different sports is what helps Bob Costas pull in about $5.5 million annually for talking into a microphone.

A name synonymous with NFL Football, Al Michaels was the longtime host of Monday Night Football, before moving to his current job as the lead announcer on Sunday Night Football on NBC. In a career that now spans five decades, Michaels earns a yearly salary of $5 million from the network.

The son of famous sportscaster Jack Buck, Joe certainly makes more money than his dad did because of the way professional sports have grown in the US. Working on NFL and MLB games, Joe Buck takes home $5 million each year. He’s also won various awards for his work as one of the top sports broadcasters in the nation. That must feel pretty good, too, on top of all that cash!

Dan Patrick may not be a household name if you don’t watch a lot of sports, but if you’re an NFL fan, he’s a name you definitely know. That’s because he appears on Sunday Night Football on NBC. Patrick also hosts a radio show and does a lot of other television appearances for NBC. All of those things combined help him bring in a cool $5 million each year. Not too shabby for a guy that loves sports and gets paid to talk about it.

Visit our media schools to learn more about the top sports announcers, as well as the most prolific news anchors, commentators and on-air personalities. We can help you if you’re interested in a media career yourself. Please contact us for more information. 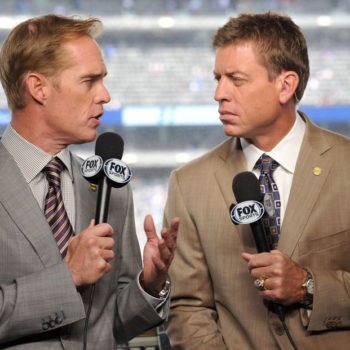 Seven Personality Traits that Make You Great for TV Broadcasting