How Did Vlogging Start

How Did Vlogging Start

You’re probably pretty familiar with vlogs, otherwise known as video blogs – but how much do you really know about this unique creative field? As it turns out, the start of vlogging might date back further than you’d expect, kicking off an interesting history and changing the world of media forever.

One of the earliest instances of vlog-style videos was in the 1980s when a New York-based artist named Nelson Sullivan began filming his experiences in New York City and South Carolina. Even though Sullivan’s videos weren’t created during a time when the Internet was widely available, and long before the term “vlog” was coined, many still consider him to be one of the earliest creators to experiment with the form.

It was in the year 2000 that vlogging as we know it began to take shape, as the first true vlog was filmed by Adam Kontras. On January 2nd, Kontras shared a video and blog entry that detailed his cross-country move to Los Angeles. Originally intended just for his family and friends, his video blog became widely popular, eventually earning the title of history’s longest-running video blog.

Several months after Kontras’ first post, the term “vlog” was used by creator Adrian Miles to categorize his own take on a video blog. Other notable vloggers include Luuk Bouwman, who started the Tropisms site to chronicle his post-college travels, as well as Steve Garfield, who described 2004 as the “year of the video blog.”

Vlogging Becomes a Larger Part of the Digital World

Once YouTube was founded in 2005, vlogging was armed with the perfect platform for creators and viewers alike. Co-founder Jawed Karim uploaded YouTube’s first vlog in April of 2005, kicking off a wave of amateur vloggers and interesting new content. Just over a year later, YouTube had exploded in popularity, becoming the Internet’s fifth most-popular browsing destination and boasting 65,000 new uploads every day.

Released in 2016, a feature-length documentary called Vlogumentary (also known as I’m Vlogging Here) gave a behind-the-scenes look at the world of video blogging. Starring famous YouTube personality Shay Carl, the documentary centered on telling the story of vlogging, its stars, and its audience. In the documentary, viewers are taken on a deep dive into the “new media revolution.”

As the vlogging industry developed, several new sharing platforms also emerged. While YouTube is the most popular choice for vloggers even today, there are a handful of others who aren’t far behind. Facebook Video and Facebook Live have become extremely popular, thanks to efforts to attract influencers and other leading content creators. Instagram, Snapchat, Periscope, and the newest arrival, TikTok, have all shown to be vlogger platform options that offer their own unique features and benefits.

The State of Vlogging Today

Now, vlogging has become a part of our mainstream culture, with content creators focusing on a massive variety of topics. Annual conventions and award shows, such as VidCon, Vloggercon, and The Vloggies, serve to highlight some of the industry’s brightest vlogging talents. No longer just a fun hobby, vlogging has evolved into a highly lucrative and exciting career.

Successful vloggers can establish an excellent stream of income, generating revenue from advertising, brand partnerships, and more. Many of today’s best-known vloggers, such as Roman Atwood and Shay Carl, collaborate with large marketing companies to secure sponsorships. The availability and demand for high-profile vlogging work have led to talent agencies, management companies, partner programs, and multi-channel networks dedicated to managing vloggers and their content. As vlogging has become a part of our everyday entertainment experience, it’s no surprise that a number of vloggers have earned impressive celebrity status.

One of the most unique aspects of vlogging as a career is that there are virtually no limits on who can find success. In fact, according to a 2019 article published by Forbes, YouTube’s current highest earner is just eight years old. Ryan Kaji, the familiar face behind the kid-friendly “Ryan’s World” channel, made a staggering $26 million in 2019. With millions of subscribers, clothing and toy lines, and shows on Nickelodeon and Hulu, Kaji is a prime example of how far today’s vloggers can take their passion. Other vloggers making the list of top earners by Forbes ranged from gamers to makeup artists, highlighting the wide range of vlog topics out there.

As of 2019, there are more than 2.5 billion digital video viewers worldwide – and that number only continues to grow. Here in the United States, by 2022, it’s projected that there will be nearly 250 million digital video viewers. With the advent of smartphones and video sharing apps, it’s certain that there are near-limitless possibilities for both current and future video bloggers.

As demonstrated by the fascinating history of vlogging, creativity, determination, and hard work are all vital to a vlogger’s success. But equally important is a strong foundation of media-focused education, which prepares you with the skills and knowledge necessary for a good start to your career.

At the Media Schools, located in Colorado, Ohio, Illinois, and Miami, our diverse array of media programs offers a variety of paths towards your dream job. Whether you have some basic vlogging experience or are brand-new to the field, the Media Schools’ film and video production programs in Miami, Colorado, Illinois, and Ohio are the competitive advantage you need. You’ll cover topics such as equipment usage, aesthetics, and industry trends, learning everything you need to know to dive into the industry.

Enroll in a Film and Video Production Program Near You

For years, the Media Schools have welcomed students to join our video production classes in Ohio, Colorado, Florida, and Illinois, combining engaging curriculum content with hands-on experiences for a one-of-a-kind media education. Don’t hold off on your career dreams any longer – especially as the vlogging industry grows and expands faster than ever!

Contact our team today for more information about how to enroll in a video production program near you!

The Best Vlogging Cameras for 2020 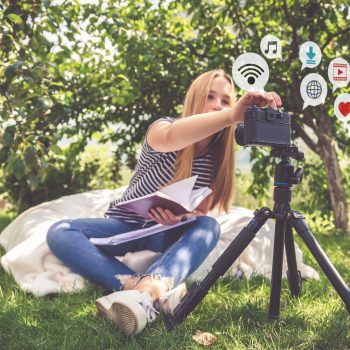 Rarely Used Vlogging Ideas that You Want to Consider